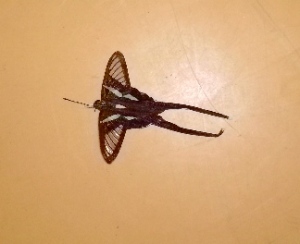 The Green Dragontail, Lamproptera meges, is a species of swallowtail found in parts of South Asia and Southeast Asia. It belongs to the Dragontails genus , Lamproptera, of the Swallowtail (Papilionidae) family. It is not rare.

Males and females very closely resembles Lamproptera curius, but differs constants as follows:
• Transverse band across fore wing placed further in towards the base; this band on both fore and hind wing greenish, not white, and not as in curius with its outer margin hyaline on the fore wing; black terminal edging to fore wing narrower, of even width throughout. Male without sex-mark.